Brandon Miele tries a volley from 25 yards it appears to be destined for the bottom right corner of the net but it falls wide.

Aaron McEneff tries to fire in a free as the board reads three added minutes but it's cleared.

Rory Patterson takes the ball and shoots on the turn but it goes to the left and wide.

Massive shots for handball from the Derry faithful as Aaron McEneff's shot is blocked, probably impossible to get out of the way from that distance.

Danny Carr tries to play in Graham Burke but Conor McDermott makes a vital intereption to send the ball for a corner which Ethan Boyle flicks over the bar.

Ethan Boyle catches Jack Doyle in possession inside the Derry half playing to Danny Carr on the edge of the box but his effort goes to the right and wide, Gerard Doherty watched it all the way despite not moving.

Derry win a corner which is taken by Nicky Low and sent towards the front post before being crossed back towards the back post by Ben Doherty but Nathan Boyle just couldn't get there to turn the ball home.

Danny Carr jinks and jives in the area before unleashing a well struck effort at goal which flies over the bar to the left and wide.

Derry seriously ride their luck as Graham hits the post from close range before Sean Kavanagh has a shot saved by Gerard Doherty which falls to Danny Carr who is blocked down before the ball is eventually cleared.

Jamie McDonagh chases down the right but a free out is awarded which Kevin Horgan sends long.

Rovers doing all the attacking currently as Sean Kavanagh's cross is caught by Gerard Doherty.

Great feet from Aaron Bolger out the right to get in behind he shoots from the right of the area just sends his effort to the right and wide past the post, let off for the home side.

Rovers corner taken from the left is cleared away for another corner this time from the right which Graham Burke takes and Lee Grace heads over the top.

Danny Carr shoots from left of the six yard box and his effort flashes across goal, he's been dangerous so far.

Ronan Finn threads Danny Carr in behind but he runs out of room and takes the ball out for a goalkick.

Derry have got the ball down and are playing here early on but are yet to create any chances.

Shamrock Rovers get us back underway through Graham Burke.

Graham Burke gets in behind the Derry defence and attempts to chip Gerard Doherty but fluffs his lines and it goes wide.

Rory Hale is dispossed around 25 yards from his own goal allowing Ronan Finn to shoot first time from the edge of the area but the ball goes to the right and wide.

Rory Hale is dispossed around 25 yards from his own goal allowing Ronan Finn to shoot first time from the edge of the area but the ball goes to the right and wide.

This first half certaintly hasn't been a classic thus far, a real stalemate playing out.

Free to Rovers around 35 yards from goal slightly to the left of the centre circle. Sean Kavanagh finds the run of the unmarked Roberto Lopes who heads over the bar, let off for Derry.

Derry getting the foot on the ball in an attempt to get their passing game going with Ben Doherty lively since his introduction. Jamie McDonagh gets in behind but is pushed wide crossing to the back post to Rory Patterson who cuts it back into the hands of Kevin Horgan.

Ronan Curtis' game comes to an end after that hit he took on the back of the head.

Fractured opening 27 minutes to the game as a few heavy challenges come in. This time Conor McDermott the victim this time. Referee in danger of losing this game..

Ronan Curtis comes back onto the fray wearing number 32.

Ethan Boyle now being booed everytime he touches the ball by the home support for his part in the Ronan Curtis incident.

Blood coming from the head of Ronan Curtis and he has walked off to get treatment as the referee hasn't stopped play while the visitors have opted to keep possession.

Rovers throw deep in the Derry have is taken long into the area by Ethan Boyle and headed clear by Ronan Curtis.

Nicky Low plays the corner back to Rory Hale 25 yards from goal but his effort is rushed and flies over the bar.

Better from Derry as Jamie McDonagh and Conor McDermott combine to win a corner.

Aaron Bolger tries a half volleyed effort from 20 yards which goes well wide.

Jamie McDonagh shows fantastic pace to beat his man before crossing into the path of Rory Patterson who had made a run to the near post. Patterson touches the ball towards the goals and it's inches wide of the post, so close!

Nicky Low has Derry's first shot of the game from 30 yards but it's well wide.

Sublime cross field ball from Aaron McEneff is skilfully taken down on the chest by Jamie McDonagh who beats his man before crossing. Rory Patterson goes down in the box but nothing is given, rightly so in this instance.

Graham Burke crosses into the area towards the back post but Gerard Doherty comes off his line to punch clear.

Graham Burke has the first shot of the game from range but his effort is weak and rolls into the hands of Gerard Doherty.

Neither side able to get their foot on the ball as of yet but the Brandywell is rocking.

Danny Carr causing problems early on as he skips past two in the box and tries to square the ball but Eoin Toal clears.

Derry City get us underway through Rory Patterson, massive crowd in here!

Odhran Crumley here in position at the Brandywell Stadium for the eagerly anticipated league clash between Derry City and Shamrock Rovers. The trajectories of the two sides couldn't be more different since Rovers beat Derry 6-1 back in March. Derry are unbeaten since that day while Rovers have seriously struggled. 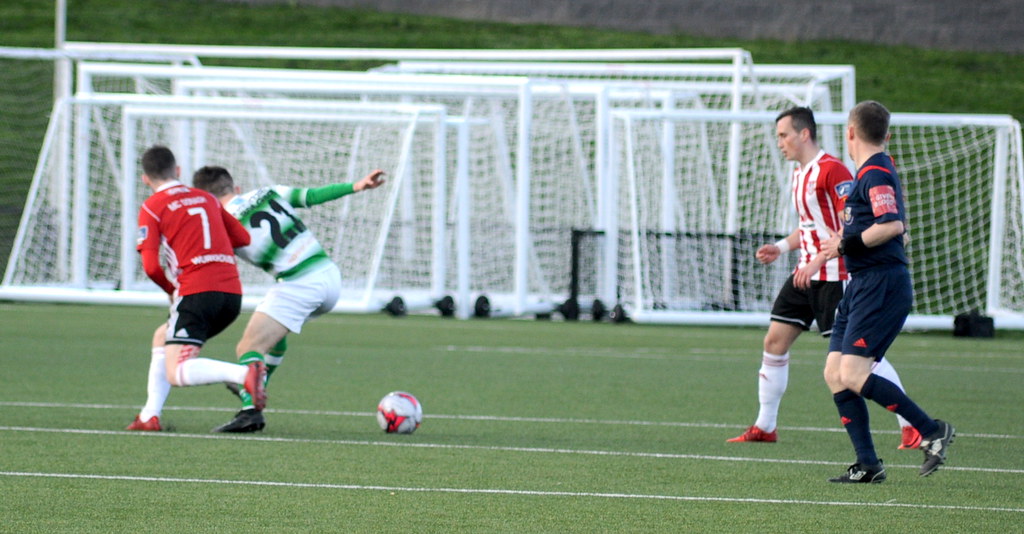 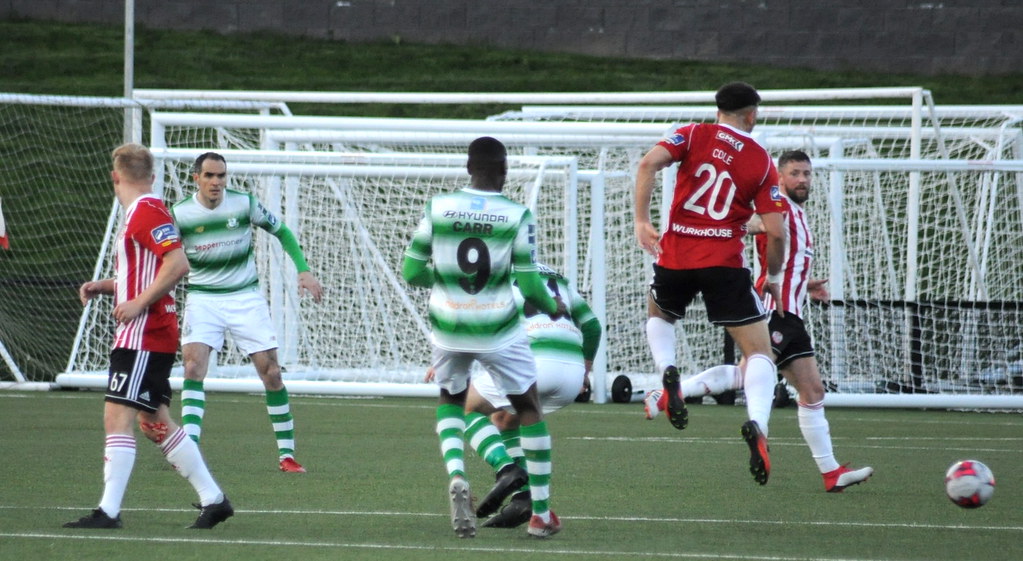 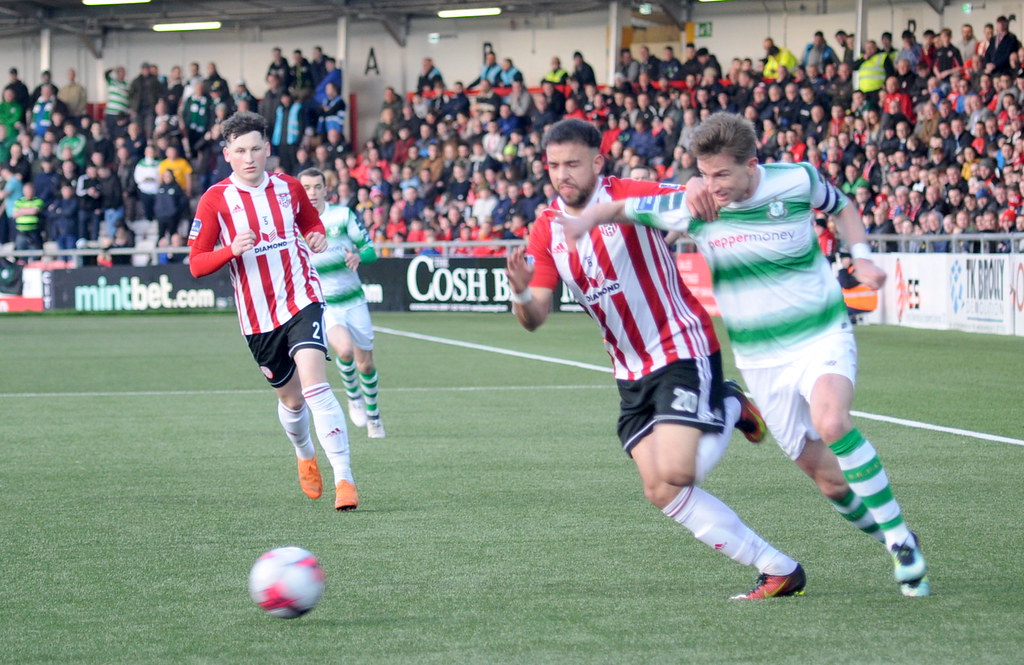