Bohemians looked like current champions at the Belfield Bowl and a 2-0 win over UCD was the least they deserved from a contest that was played openly in front of a substantial away support.

The Gypsies weren’t holding back and started with conviction. After playing most of the first minutes amongst the UCD defence Conor Powell showed quick feet in the 7th and fed Mark Quigley who was showing good early signs. The cross from the ex-St Pats man found Cretaro alone; his header saved brilliantly by Billy Brennan. 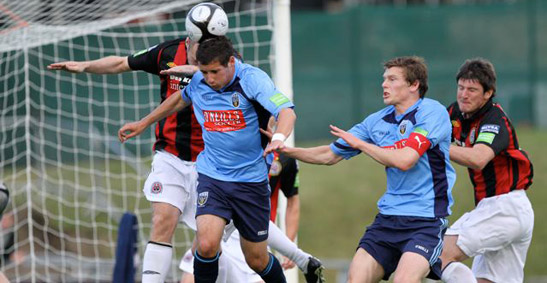 The Bowl has been the place to go this season if it’s neat, passing football you’re partial to but it was Bohs who were showing early on why they remain the team to beat. Cretaro, who started on the bench on Friday last (against Sporting Fingal) was on from the start here and was proving a handful for the Students. Twelve minutes in he was hauled over in the box by Paul Corry and Dave McKeon pointed to the spot. Paddy Madden is the man in form and he stuck it away, to Brennan’s left, with minimum fuss.

UCD were making little threat in the final third and when they did make their first real foray with purpose in the 28th minute, Chris Mulhall lost his feet at the critical moment after Dwayne Wilson had set him up from the right.

Bohs kept pressing and despite a lull in proceedings got a clear chance to go two up five minutes from half-time. Good exchange play between Cretaro and Brian Shelley ended up with Gareth McGlynn curling just right of Brennan’s goal. Despite the possession enjoyed by the Gypsies the Students could have drawn level in the 45th when Sean Harding found himself getting two bites of the cherry in an unfamiliar position just outside the Bohemians box. The shot that mattered sailed inches wide.

Martin Russell may have had words in the dressing room at the interval; UCD starting the second period with real enthusiasm at least. In the 58th minute Ciaran Kilduff flashed just wide of Barry Murphy’s goal just seconds after he’d replaced Paul Corry.

With Bohemians readying themselves for Europe Pat Fenlon can be sure all in his squad will be desperate to impress coming up to Tuesday weeks 1st leg. None more so than Cretaro, who is champing at the bit to nail down a starting position. He was popping up everywhere here. Sixty six minutes in he forced Brennan into another save after he eventually got the better of Ciaran Nangle and only four minutes later he found Madden on the left with a pin point pass across the defence.

Madden, on current form, only needed a sniff and finished superbly off the angle of the box. Six goals from four games now and this kind of form from the young Dubliner will likely be attracting one or two watchful eyes from further afield- his brace ensuring Bohs sit in third behind Shamrock Rovers and St. Patrick’s Athletic.