Click on the image to view a selection of photos from the game, courtesy of Paul O'Donohoe.

Sporting Fingal and Sligo Rovers played out a score draw at Morton Stadium in a relatively timid affair, where both sides had chances for the winner but failed to take them.

Gary O’Neill opened the scoring for Fingal in the 51st minute after he went past Alan Keane and smashed the ball past Richard Brush from close range.

Minutes later Padraig Amond the equalised for Rovers after an uncharacteristic defensive slip-up from Stephen Paisley in the 55th minute. 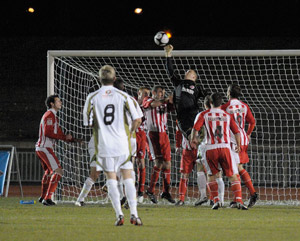 The first half was largely a scramble for possession in the middle of the park. The match did start out with the two sides exchanging attack and counter-attack, but not many shots found their way on target.

A first goal could well have come for Sporting Fingal after just nine minutes. A Conan Byrne free-kick was deflected, but the ball was well saved.

Byrne went close again a minute later with a fizzing shot from the edge of the box which went to the right and wide.

In goal for Sligo Rovers, Richard Brush enjoyed a fine first half as he denied Fingal on numerous occasions.

Stephen Paisley went off injured early-on after a clash of heads, but came back on minutes later sporting a bandage around his head only to earn himself a yellow card.

Just before half time, Richard Brush rushed out to claim a high ball outside his penalty area. Despite the protests of several Fingal players, the referee judged Brush to have used his chest to clear the ball away and not his hands.

Both sides went into the break level after a half in which the ball was largely mired in midfield.

Coming out after half time, the match seemed to change pace dramatically. Both sides began to push hard for an opening goal.

The opening goal did come for Sporting Fingal after 51 minutes. Gary O’Neill used his skill to come in off the right wing, beat Alan Keane and finish past Brush to make it 1-0 to the Ravens.

It was then Rovers’ turn to attack and the Bit O’Red poured men forward. Their equaliser came in the 55th minute thanks to a slip by Fingal defender Stephen Paisley.

Rovers weren’t content with just the equaliser though, and for a while pressed forward in search of a winner.

This let Fingal exploit them on the counter-attack, but The Ravens weren’t able to take advantage of the chances they had.

The match ended 1-1, giving Sporting Fingal their first ever point in the Airtricity Premier Division in their first home match at that level.