An incredible evening’s entertainment at Oriel saw the Dundalk team who were so insipid and uncoordinated just last weekend produce a display that tore apart the champions elect with a 5-1 victory.

First half goals from Tom Miller, Matthew Tipton with a brace and Faz Kudozovic gave the Lilywhites a 4-0 advantage at half time. At least Rovers can claim to have drawn the second half as a Gary Twigg walk in and a hat trick goal for Tipton resulted in a 5-1 final score.

The home team came out like men possessed and took the lead after just three minutes. Ross Gaynor swung in a right sided free where Miller rose unopposed to head down and towards Alan Mannus bottom corner. Mannus got a strong hand to the ball but it somehow slithered beneath him and into the net. 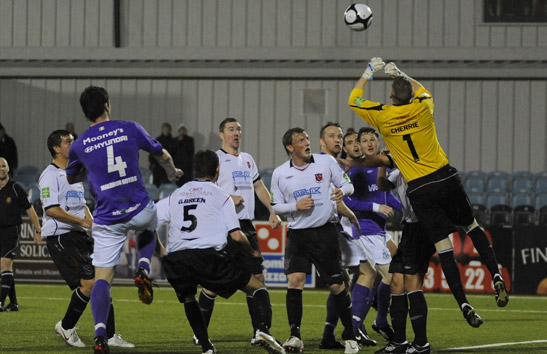 Dundalk doubled their lead on 17 as a period of pressure resulted in Dean Bennett getting free down the inside right channel, he pulled back into the box where Faz controlled coolly and slotted past Mannus.

Just ten minutes later a bad evening got worse for the Tallaght boys. Bennett won a tackle in midfield he slipped it forward to Kudozovic who skipped forward and crossed to the far post, Hatswell who was up from his full back berth headed back across goal and Tipton headed to the back of the net.

Incredibly a fourth goal came Dundalk’s way as a hopeful Ross Gaynor ball forward was missed by Aidan Price allowing Tipton a free run on goal where he made no mistake.

No doubt Michael O’Neill stripped the dressing room walls and made a double substitution with James Chambers and Chris Turner coming on and in fairness they got a foothold in the middle of the park that had been so badly lacking in the first half.

Rovers got their consolation goal on 60 minutes as a long ball through was missed inexplicably by Peter Cherrie on the edge of his box and allowed Twigg to walk the ball home.

However despite the vocal urgings of the Rovers fans plus a few fireworks for good measure that was as close as the scoreline got and Tipton even found time to collect his hat trick when a Wayne Hatswell long ball was touched on and allowed Tipton to collect on the edge of the Hoops box. He drew Mannus expertly before delicately chipping him to send the home supporters into raptures.

So who said the title race was all but over, next up for Rovers in the league is a fixture at home against Galway whilst Dundalk will be brimming with confidence for their trip to St Pats .