A Karl Sheppard goal after 48 minutes was enough to give Galway United a hard-earned and much-needed victory over UCD at the UCD Bowl on Friday evening.

Though UCD enjoyed the lion's share of possession, they had a very frustrating night in front of goal, and weren't able to prevent United securing their fourth win on the road this season.

The Students started the game at near breakneck speed, as they were making their intentions very clear from the word go. The first real opportunity of the game came on seven minutes when UCD centre-half Evan McMillan rose well to meet a header from Keith Ward, but Galway 'keeper Barry Ryan was more than equal to it. 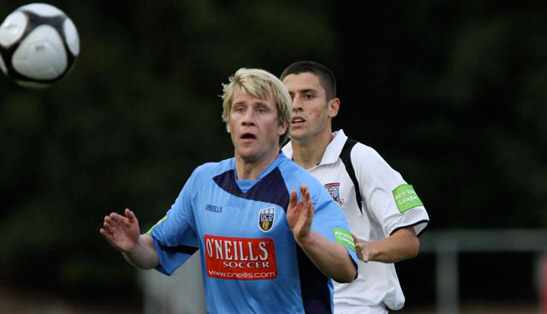 Sean Connor's side started to compete well though, and they conjured up an excellent chance to open the scoring after 17 minutes when former Everton prodigy Karl Sheppard picked out Stephen O'Donnell with a delicate pass. The midfielder’s run was expertly-timed and his shot wasn't bad either, but UCD 'keeper Gerard Barron managed to turn it way in the end.

This was an indication to Martin Russell's men of the kind of danger that The Tribesmen could pose for them, and it was certainly noticeable how much last year's First Division winners increased the tempo after this. Ward was causing a plentiful of problems for the Galway rearguard with his strong running, and he broke free from a number of challenges on 24 minutes to unleash a well-directed shot that was expertly dealt with by Ryan.

UCD would continue to create chances as the half wore on, with the influence of the returning Ciaran Kilduff starting to tell. The Kildare native went close with an effort on the turn after 30 minutes, which was deflected behind by Galway defender Jamie McKenzie, and he forced another save from Ryan six minutes with a similar attempt.

Then, with just seven first-half minutes remaining, UCD had their clearest chance of the game to that point when a thundering header from a Chris Mulhall corner came crashing off the crossbar, before going away to safety.

This was a huge sigh of relief for Galway, although they very nearly got a goal of their own when Sheppard broke free from deep, and hit a low shot that had Barron stretching, with his rebound shot being cleared off the line by the busy McMillan.

Both sides certainly had their chances to score by the time match referee Rob Rogers' half-time whistle sounded, but they had to be content to go in at the break on level terms, with the game still very much in the melting pot.

A good start to the second half for either side was going to vital in deciding the winner of this tie, and it was Galway who got it as Sheppard got on the end of a fine delivery from the left by Stephen Walsh to finish coolly from ten yards three minutes into the half.

This came as a massive boost to Galway, who had been on the backfoot for quite a bit of the first half, and all of a sudden they were throwing down the gauntlet for UCD to come at them. They did start to gather possession again following the concession of this goal, but Galway were now far more comfortable with the ball at their feet, and Sheppard in particular was proving to be a real thorn in side of UCD.

To UCD's credit, they did eventually compose themselves, and started to get back on top as the game entered the final half-hour. Ward was proving to be the most effective player for the home side, and he went close with efforts in the 70th and 75th minutes respectively, with the latter being an especially close attempt from a 30-yard free-kick.

It seemed at this point that Galway would be doing well to hold on their advantage, but they very nearly caught UCD on the hop again when lively substitute Tom King received the ball wide on the right, but his shot was turned away by Barron.

The final ten minutes proved to be a nervy affair for Galway, and UCD were going full throttle in their quest for a crucial equalising goal. Kilduff and Mulhall did go close for UCD during this period, as did the outstanding Sheppard for Galway, but they simply couldn't break a determined and resilient Galway back line.

This win gives Galway a crucial eight-point cushion over Drogheda United, and puts them just three points behind The Students, as we move into the final few months of the season. Next up for United is the visit of Sporting Fingal to Terryland Park next Friday, whereas UCD have a trip to Oriel Park and Dundalk to look forward to.