The inevitable happened at Oriel as a St. Patrick's Athletic team high on confidence and work rate disposed of a Dundalk team as low on energy as they are on confidence at the moment. A first half brace from the head of Dave Mulcahy and a second half clincher from Conor Kenna were enough to give all three points to the Inchicore boys. 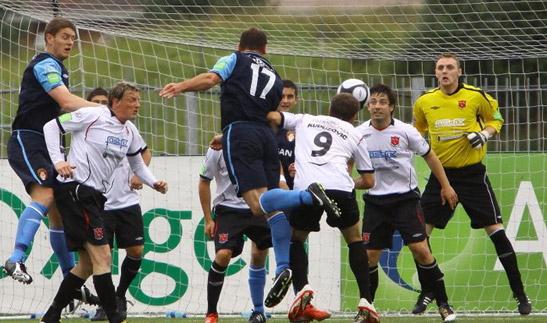 Pats opened the scoring in the sixth minute as a corner from Damien Lynch was flighted to the centre of the goal about eight yards out to the untroubled head of Dave Mulcahy who had no problem finding Peter Cherries bottom left hand corner. Dundalk are conceded a lot of goals in this way recently and they must be desperate to get Liam Burns back into the team after injury.

The second goal was highly also unsatisfactory from a Lilywhite viewpoint. In the 18th minute a Ryan Guy throw from the right hand side was headed on at the near post and found Mulcahy beyond the far post and at an acute angle. From this angle his header back across goal cleared everyone and nestled in the far corner of the net.

Dundalk finally started to get a foothold and efforts from a Breen header on 36 minutes and a Miller hooked shot on 45 minutes brought saves from Gary Rogers in the Pats net. But Pats hit the changing rooms two to the good and pretty much in control.

The evening got even worse for the Lilywhites on 51 minutes when Neale Fenn was adjudged to have handled the ball around 35 yards from his own goal. Damien Lynch floated in a ball to the centre of the net where a stooping Conor Kenna deflected the ball into the net with the top of his head.

That killed the match as a contest and the superior work rate of Pats was enough to snuff out any potential come back by the home team. In fairness to Shaun Kelly it wasn’t for the want of trying on his part as several strong runs down the wing was about the only threat that Dundalk could muster.