Click on the image to view a selection of photos from the game, courtesy of Conor Dodd.

Ciaran Kilduff’s early goal in the second half was enough to seal victory for the Students as they saw off a spirited Bray Wanderers side to gain all three points and record their first victory at home this season.

UCD started the game brightly with all the pressure coming from the home side in the opening 10 minutes. However, Bray started to gain in confidence and had the best opening chance on 14 minutes when Daire Doyle played through Jake Kelly only to see his shot hit the side netting after UCD keeper Billy Brennan slipped when coming to collect the ball. An early warning for the Students.

Bray began up the tempo for the next ten as they searched for an opener coming close on 19 minutes when a low cross from the right by James Kavanagh was met by a shot from David O’Neill which flew just wide. 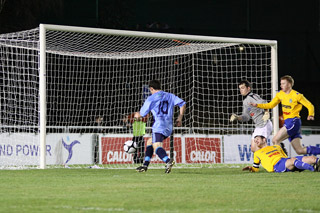 UCD started to find their range and had a decent opportunity on 23 minutes when Andrew Boyle played a ball across the edge of the box, to the onrushing Greg Bolger, whose low drive narrowly went wide. Moments later, UCD came close again when Graham Rusk played a neat back heel to Bolger who could only slice his left footed shot wide from 18 yards.

Kilduff also wasted another glorious chance for the home side on 35 minutes. Left back Ciaran Nangle combined well with Rusk down the left who set up Kilduff, only for the big man to blaze his shot over the bar.

Bray kept defending well, but it looked only a matter of time before the home side would score. UCD should have gone ahead in the 39th minute when a brilliant double save from Wanderers 'keeper Brian Kane kept the game level.

Robbie Creevy turned Dane Massey on the right wing, cut inside and shot goal wards. The keeper parried the shot into the path of Rusk who was denied by another excellent save by Kane.

The home side started the second half where they left off and deservedly took the lead in the 50th minute after a hectic goal mouth scramble.

Creevy broke down the right and cut into the penalty box only to see his shot blocked. The ball fell to Rusk whose effort was also charged down, but luckily it rebounded into Kilduff’s path who couldn’t miss from six yards to net the eventual winner.

Bray responded well to going behind, as they began to push more men forward in search of the equaliser; young Bray midfielder Kavanagh was threatening throughout, but couldn’t find a way past the UCD defence.

Peter McMahon nearly made it two on 62 minutes when he picked up a loose ball, drove at the Bray defence and shot from outside the area unlucky to see his shot graze the cross bar. The Students kept up the pressure on the visitors and minutes later a storming run from the back by substitute Mick Leahy should have doubled the lead, but a smart save denied the defender.

Bray didn’t let their heads drop and nearly equalised out of nothing in the 74th minute when Kavanagh’s hopeful 40-yard punt forward somehow landed on the crossbar but UCD cleared the danger. The Seagulls continued to apply the pressure on the home side as Gormley and his team looked for the all important equaliser.

UCD freshened up things with 15 minutes to go, bringing on both Chris Mulhall and Keith Ward. The substitutes made an early impact with two shots narrowly going past the post from wide areas. The Bray manager also made two changes bringing on John Mulroy and Shane O’Neill.

Wanderers continued to the press for the elusive equaliser in the final minutes as UCD absorbed the pressure, looking to counter attack and get the ball wide.

The Students eventually held on and recorded their first victory at The Belfield Bowl this season to the delight of their manager Martin Russell.

Eddie Gormley can be happy with his players effort, but the Students deserved all three points on the night. This is Wanderers fourth straight defeat this season and they host defending champions Bohemians this Monday, while UCD face an trip away to Shamrock Rovers next Friday.